BIRMINGHAM 2022 CELEBRATES THREE YEARS TO GO WITH THE COMMONWEALTH SOCIAL 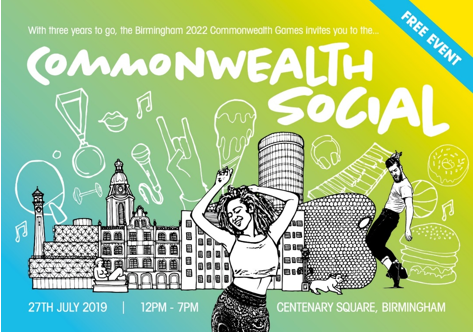 BIRMINGHAM 2022 CELEBRATES THREE YEARS TO GO WITH THE COMMONWEALTH SOCIAL

With three years to go until the Commonwealth Games, Birmingham 2022 is marking this momentous milestone in the countdown to what will be a once-in-a-lifetime event, by hosting the Commonwealth Social, a free family friendly public celebration on Saturday 27th July 2019 from 12:00 – 19:00.

Taking place in Birmingham’s recently redeveloped Centenary Square, the Commonwealth Social will be a fabulous festival of sport, culture and food with the people of the West Midlands at its heart, celebrating everything that makes this vibrant region special.

The Commonwealth Social is an opportunity for local people to join in the celebration of the upcoming Games, which will provide a unique opportunity to put the city and the region on a global stage. It will also be a first glimpse at the new Birmingham 2022 look and feel, which has been created by working closely with communities from across the West Midlands to create something that is truly representative of the region and its people.

Communal dining tables in the centre of the square will encourage visitors to pull up a chair and sit alongside their neighbours, international athletes, DJs, local community leaders, tastemakers from the region, local celebrities and those working to make the Games possible, and bring together the community to put their stamp on the Games in the way that only Birmingham can.

Attendees can expect to be wowed by pop-up performances from regional talent including dance groups, brass bands, choirs and world DJ sets. Local street food traders from Digbeth Dining Club will provide an exciting range of cuisine from across the Commonwealth, including Caribbean, Mauritian, Indian and British, encouraging local people to enjoy exciting new flavours from around the world. Each trader will also offer a special dish with £1 of its proceeds going to Foodinate, a not-for-profit organisation working to end local hunger. Foodinate forms partnerships with restaurants, venues and charities to provide meals to local people in need, and has provided over 100,000 free meals so far.

The day will play host a number of sports demonstrations including 3X3 wheelchair basketball and much more. Team England athletes from the region and beyond will be in attendance to join in the celebration and mingle with local people.

Josie Stevens, Chief Marketing and Communications Officer for Birmingham 2022: “Local people are at the heart of Birmingham 2022, they are what will make these Games truly special, so we’re inviting people across the region to join us and some of our athletes to celebrating this major milestone. Birmingham & the West Midlands has a rich cultural heritage so what better to way to bring people together than to unite over a shared love of sport, food and live performances!

“The Commonwealth Social is part of our ‘three years to go’ celebrations which also sees us out engaging with people across the region in the ten locations where we have sports venues. We’ll also be unveiling our new ‘look’!

“Birmingham 2022 will be a world-class festival of sport and culture. It’s also a once-in-a-lifetime opportunity for our region to show the world the fantastic culture and community spirit we have to offer. The Commonwealth Social is the start of creating a Games that will be a catalyst for transformation across the region.”

Birmingham 2022’s Common Ground project, which has been connecting communities across the West Midlands by inviting them to have a conversation about the Games and how Birmingham 2022 can benefit their community, will conclude at the Commonwealth Social with the reveal of an artwork that draws upon the thoughts, ideas and experiences of the communities that Common Ground has visited.

The innovative art-led research project has visited locations across the West Midlands throughout July, speaking to local people to better understand how the Games can make a positive impact for them and their community. Each Common Ground event produced an artwork drawn live by local illustrators Ruth Porter and Harley Davison, which serves as a visual interpretation of the conversations with the community. Those who participated in Common Ground will be invited to the Commonwealth Social for the reveal of the resulting artworks.