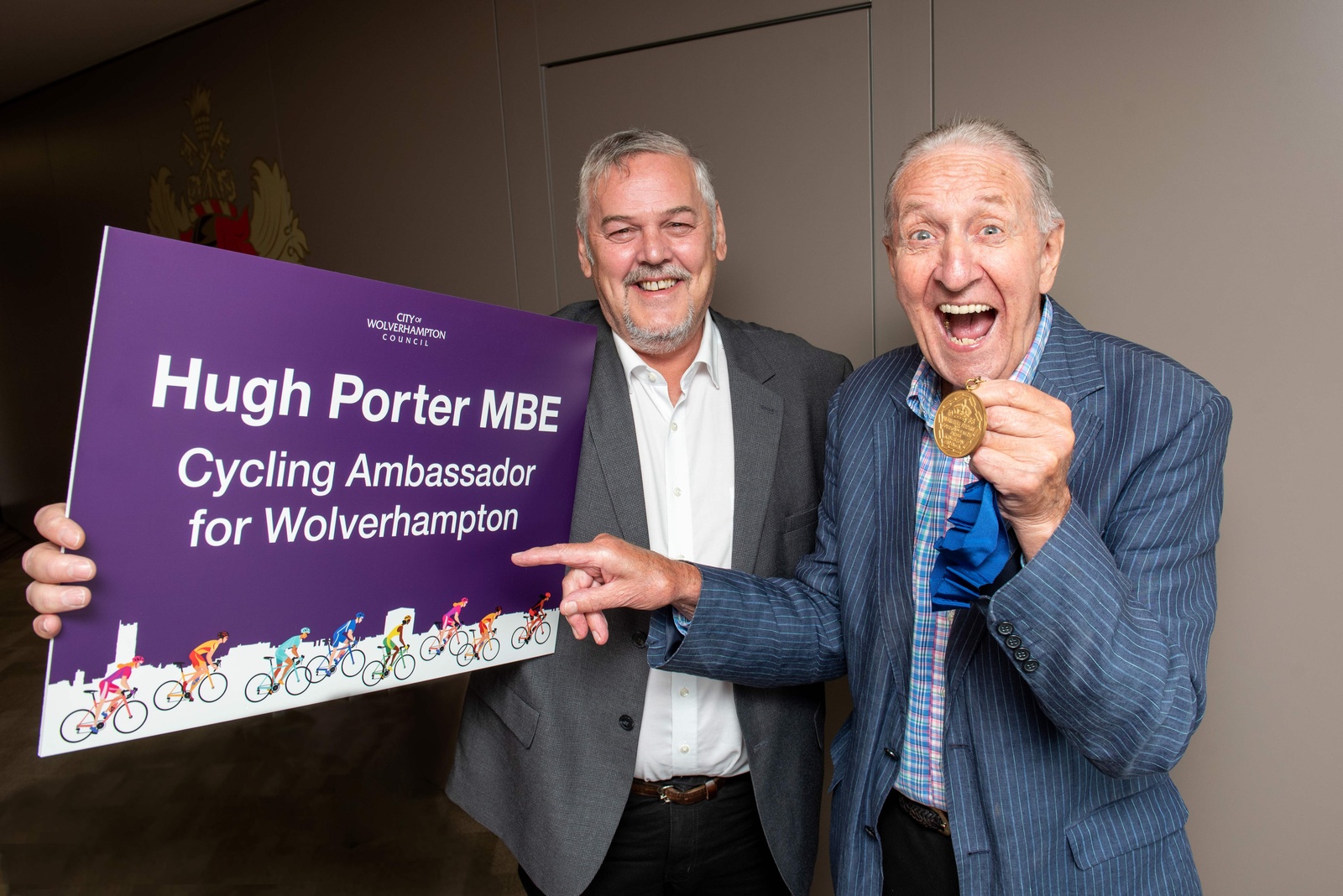 Hugh, one of Britain's greatest former professional cyclists, has been given the accolade by City of Wolverhampton Council to recognise his tremendous achievements in the sport.

In his ambassador role, Hugh, who won Commonwealth Games gold in 1966 and four world titles in the individual pursuit, will act as a figurehead for cycling in the city. He will help promote the Games as well as support other initiatives across Wolverhampton that show the council’s commitment to providing opportunities for residents to take up or continue cycling.

The council is keen to provide a healthier transport option for residents and reduce carbon emissions in the city. To support this, a new pathway for the exclusive use of cyclists and walkers is currently being developed through the central reservation along the entire length of Ring Road St Peters.

Created following a successful bid for just over £1million from the government’s Active Travel Fund, the money will also see the development of a continuous cycle route along the A4124 Wednesfield Road from Culwell St junction to link up with existing provision on Wednesfield Way.

Wolverhampton is also part of the West Midlands Cycle Hire scheme, which offers the opportunity to hire a bike from docking stations across the city. The scheme aims to encourage more people to become active and healthy by using an environmentally-friendly alternative to the car for shorter journeys.

Today’s announcement celebrates the fact that it is exactly one year before Wolverhampton will host the Birmingham 2022 Commonwealth Games cycling time trial. On Thursday, August 4 2022, around 90 competitors are expected in West Park to take part across the men’s and women’s events.

The historic city park will be the start and finish location of the exciting time trial, which is often referred to as ‘the race of truth’. West Park, which opened in 1881 and is considered one of the finest examples of Victorian parkland in the country, will provide a fitting backdrop to the start and finish of the exciting cycling time trial race, featuring the very best cyclists from across the Commonwealth.

Wolverhampton has strong links to road cycling, with the first mass start cycling road race being held in the city in 1942. Spectators in 2022 will be able to line the route of the time trial, giving local people and visitors a fabulous opportunity to view the drama as it unfolds.

The Commonwealth Games, which run from 28 July to 8 August 2022, will see a wide range of sports including swimming, diving, boxing, judo, gymnastics, weightlifting and triathlon hosted in a range of venues across the region.

I’m honoured and proud to be invited to become the City Cycling Ambassador, especially on this day as it’s exactly twelve months to the cycling road time trials for the Commonwealth Games, which will start and finish in the city’s beautiful West Park. It’s been 55 years since I won my Commonwealth Games gold medal in Kingston, Jamaica – but it’s left a legacy of sporting memories I will never forget.

Cycling has been my life since I was a young boy and this privileged role of Cycling Ambassador will give me the opportunity to encourage people young and old to ride bikes, I can’t wait bring it on! Let’s all aim to become fitter healthier and play our part in reducing carbon emissions.”

Leader of City of Wolverhampton Council, Councillor Ian Brookfield, said the decision to name Hugh as the new City Cycling Ambassador was a testament to his remarkable achievements.

Hugh is a fantastic sportsman and a real example of what hard work, commitment and passion can achieve. I’m delighted that he has agreed to be our new City Cycling Ambassador and I hope he inspires people across the city to discover an interest in this wonderful greener, cleaner way to get fit and enjoy the fresh air.

We’re doing a lot of work in the city to encourage bike riding, including creating two new dedicated cycle lanes along Ring Road St Peters and the Wednesfield Road, as well as supporting the West Midlands Cycle Hire scheme. These initiatives will be given a boost by hosting the high-profile cycling time trial.

Clearly, the Commonwealth Games will also offer a strong economic benefit for the city. People from across the world will be watching us and this is a wonderful opportunity to show them what our city has to offer as we continue to relight Wolverhampton.”

To find out more, visit www.birmingham2022.com where you can also sign-up to receive the latest updates about the Games and hear about tickets and volunteer opportunities.

To find out more about West Midlands Cycle Hire and activities planned during the summer visit www.wmcyclehire.co.uk or follow them on social media @wmcyclehire

MYTH: 'My child can swim in a pool, so they can swim in the sea'. FACT: Swimming in open water presents a differen… https://t.co/fpRrI2l44Y
Follow us on Twitter @BCbeactive