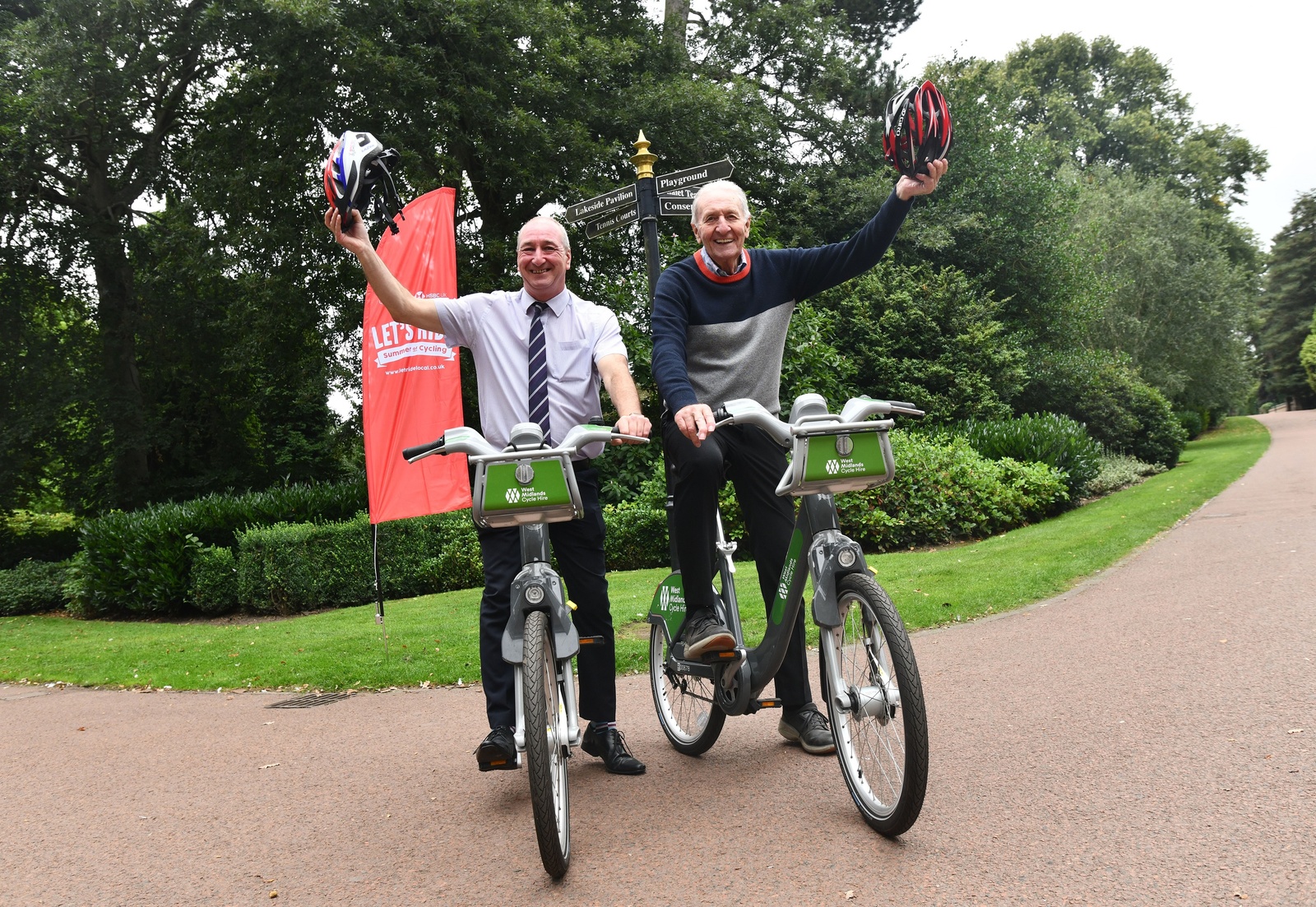 Hugh, one of Britain's greatest former professional cyclists, took part in a West Midlands Cycle Hire skills session in West Park before taking a tour of new cycle lanes being created in the city centre. He joined the skills session, which covered on-the-bike skills, rules of the road, safety tips and ways to build up confidence, alongside Councillor Steve Evans, City of Wolverhampton Council’s cabinet member for city environment and climate change.

Officers from the council’s transport team then joined Councillor Evans to take Hugh on a cycle tour of the city centre to highlight the work being done by the council to improve cycling opportunities for residents.

Hugh, who won Commonwealth Games gold in 1966 and four world titles in the individual pursuit, was recently given the title of Cycling Ambassador by City of Wolverhampton Council to recognise his tremendous achievements in the sport. In his ambassador role, he will act as a figurehead for cycling in the city, helping to promote next year’s Commonwealth Games as well as supporting other initiatives that show the council’s commitment to providing opportunities for residents to take up or continue cycling.

The council is keen to provide a healthier transport option for residents and reduce carbon emissions in the city. To support this, a new pathway for the exclusive use of cyclists and walkers is currently being developed through the central reservation along the entire length of Ring Road St Peters. New traffic lights have been installed to enable users of the pathway to safely cross over the busy Waterloo Road junction onto Ring Road St Andrews and continue their journey down to Chapel Ash Island via the existing path, which will receive an upgrade under the works.

The work has been carried out following a successful bid for just over £1million from the government’s Active Travel Fund. The money will also see the development of a continuous cycle route along the A4124 Wednesfield Road from Culwell St junction to link up with existing provision on Wednesfield Way.

Wolverhampton is also part of the West Midlands Cycle Hire scheme, which offers the opportunity to hire a bike from docking stations across the city. The scheme aims to encourage more people to become active and healthy by using an environmentally-friendly alternative to the car for shorter journeys.

Having spent a couple of hours pedalling around the cycle paths and looking at the proposed routes in the city, I’m truly surprised and delighted to see how many are in operation and what is planned for the future. As a cyclist since I was a young boy, this is all music to my ears and flags up just how committed our great city is to achieving a carbon neutral atmosphere. The initiatives will help people to ride to work and families, particularly youngsters, cycle for pleasure in a healthy environment.”

It was fantastic to spend time with Hugh, he is a real advocate for cycling and as a council we are determined to do all we can to help people across the city to discover an interest in this greener, cleaner way to get fit and enjoy the fresh air. Hugh was able to find out more about the West Midlands Cycle Hire scheme, which is open to all our residents and I would encourage anyone who would like to give cycling a go, to try it out by hiring a bike from one of the docking stations which are located across the city.

We were also able to show Hugh the amount of work we are doing to encourage safe cycling through Wolverhampton. We hope our new cycle lanes will encourage more people to choose this healthy transport option.

And of course, as we gear up to host the Birmingham 2022 Commonwealth Games cycling time trial next summer, we hope that will prove a real inspiration for people to get out on their bikes.”

On Thursday, August 4 2022, around 90 competitors are expected in West Park to take part across the men’s and women’s events of the Birmingham 2022 Commonwealth Games cycling time trial. The historic city park will be the start and finish location of the exciting time trial, which is often referred to as ‘the race of truth’.

To find out more about the Games, visit www.birmingham2022.com where you can also sign-up to receive the latest updates and hear about tickets and volunteer opportunities.

To find out more about West Midlands Cycle Hire visit www.wmcyclehire.co.uk or follow them on social media @wmcyclehire

RT @Blkctrymoving: Do you enjoy being outdoors? Gardening? Horticulture? Doing good in your community? Then why not contact us to see what…
Follow us on Twitter @BCbeactive