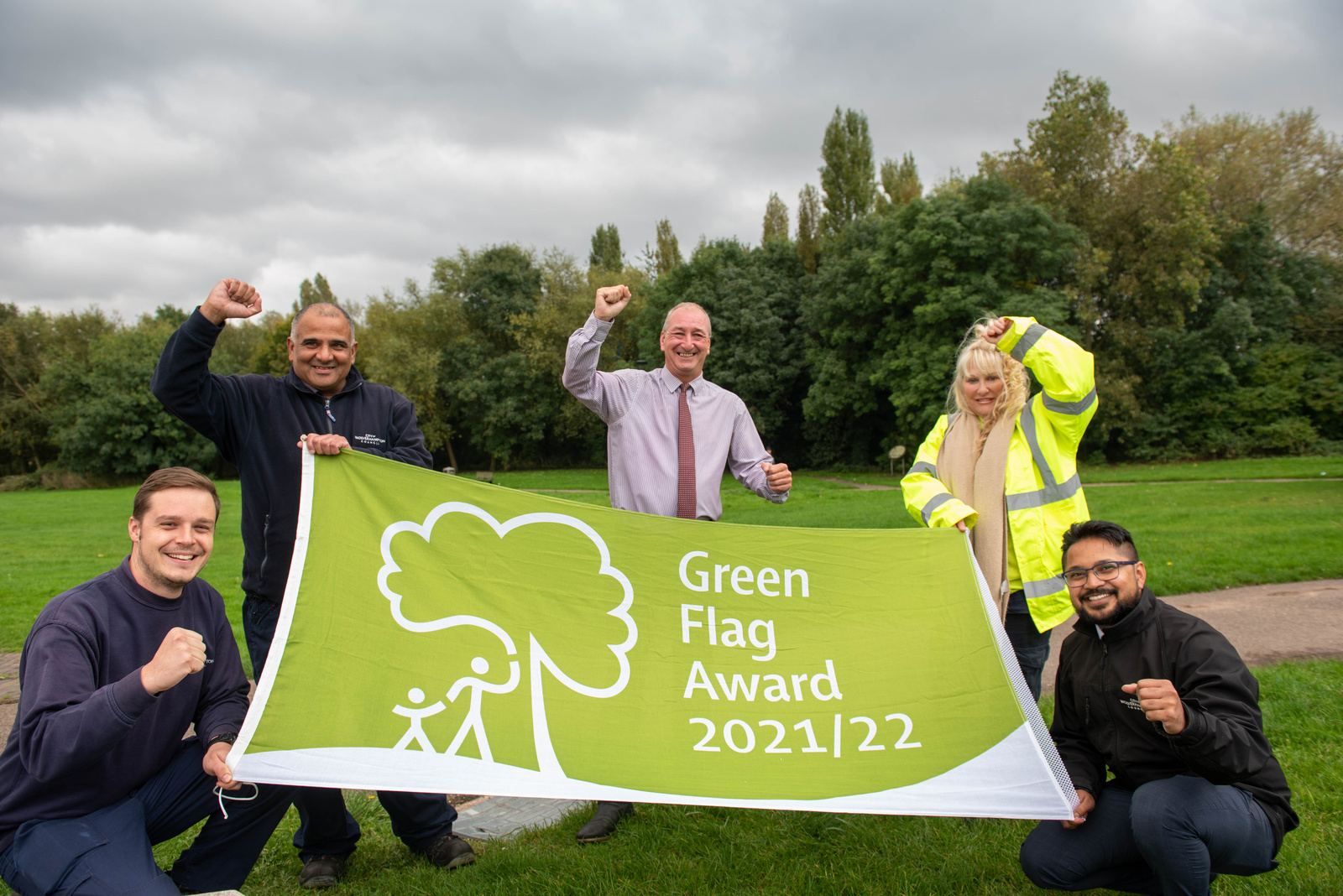 Wolverhampton’s popular Phoenix Park has today joined four other city beauty spots in being recognised as one of the very best green spaces in the world.

The Dudley Road park has won a Green Flag Award this year, with West Park, East Park, Bantock Park retaining their flags for the fourth year in a row and Pendeford Mill Nature Reserve retaining its flag for a third year.

Phoenix Park has been awarded under the scheme for demonstrating that the park is well managed and maintained. The local community support for the park was also recognised by the judges.

Future planned improvements include the renovation of the sensory garden and replacement of the artificial cricket pitch. Phoenix Park also plays an important role in community celebrations and will again host this year’s annual Diwali celebrations, from 4-8pm on Saturday 23 October.

We are absolutely delighted that Phoenix Park has this year been recognised by the Green Flag Award scheme and we’re equally pleased that four of our other beautiful green spaces have retained their flags. The past 18 months have shown us just how important our city’s parks and green spaces are. Throughout lockdown they have played a vital role in offering a place to exercise, get fresh air and allow families and friends to meet safely.

We are really proud of all our parks in Wolverhampton, they are well loved by our residents and attract many visitors to the city. The Green Flag Awards are a wonderful recognition of the hard work that goes into providing clean and green spaces that everyone can enjoy. I’m so pleased the judges have acknowledged the efforts our officers, volunteers and friends of our parks put in to making our popular parks and nature reserve, award-winning beauty spots in the city.”

I would like to congratulate everyone involved in making Wolverhampton’s parks and green spaces worthy of a Green Flag Award. To meet the requirements demanded by the scheme is testament to the hard work of the staff and volunteers who do so much to ensure that Phoenix Park, West Park, East Park, Bantock Park and Pendeford Mill Nature Reserve have high standards of horticulture, safety and environmental management and are places that support people to live healthy lives.”

The Green Flag Award scheme, managed by environmental charity Keep Britain Tidy under licence from the Department for Levelling Up, Housing and Communities, recognises and rewards well-managed parks and green spaces, setting the benchmark standard for the management of green spaces across the United Kingdom and around the world.

Pendeford Mill Nature Reserve is a site of valuable environmental and historical significance. The site covers almost 60 acres of naturally managed countryside and dates back to the 13th century. It provides a stable and protected habitat for wildlife on the fringe of an urban area. West Park is around 45 acres, includes a beautiful lake and a stunning landscaped green space within a 10 minute walk of Wolverhampton city centre.

The park is considered to be one of the best, unspoilt examples of a Victorian park left in England and is Wolverhampton's premier open space.

East Park, situated off Hickman Avenue is also around 45 acres in size and is popular with local residents due to children’s play areas, the cycle speedway track, multi games courts, football pitches and the popular outdoor pools in the summer months.

Bantock Park is around 40 acres, compromised mostly of an open space, which still retains its 'rural' character, with a variety of trees, a nature trail and home of the iconic Bantock House. Bantock Park also has football pitches and pitch and putt area.

View all news
£1,441,897 funding awarded to the Black Country to build 2022 Commonwealth Games legacy
Sport England has announced £1,441,897 of new funding for the Black Country as part of its wider investment into the Birmingham...
Read more about this article
Cycling and walking safety highlighted for West Midlands students this Road Safety Week
More than 3,200 teenagers and young adults are getting specialist cycling and walking safety sessions to help cut collisions on...
Read more about this article
Schools celebrate achieving Anti-Bullying Charter Status
Sixteen schools in Wolverhampton were awarded #YES Anti-Bullying Charter Status at a ceremony on Tuesday.
Read more about this article

RT @HealthySpacesWC: We are looking for volunteers to help with tree planting at George Rose Park in Darlaston. Planting is being funded…
Follow us on Twitter @BCbeactive