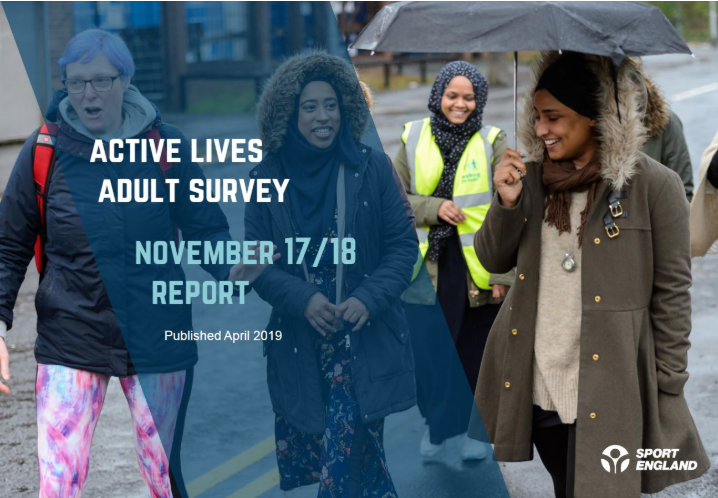 Based on data gathered from November 2017-November 2018, a total of 498,100 more people (aged 16+) are meeting the Chief Medical Officer’s guidelines of doing at least 150 minutes of moderate intensity physical activity a week compared to 12 months ago.

In addition to the increase in people classed as active, the number of inactive adults – those doing fewer than 30 minutes of physical activity a week – has reduced by 185,000.

These figures mean that 62.6% of the adult population are now classed as active, with 25.1% now inactive.

Sport England's research also shows that enjoyment is the biggest motivator for the active while, for those who are not active, perceived ability has the biggest impact on how much they do.

The results, based on a sample of 180,000 members of the public, show specific increases in the number of active women, with a year-on-year increase of 286,000 thanks in part to efforts across the sport and physical activity sector to appeal to women.

This means the gender gap between numbers of men and women who are physically active, is continuing to narrow.

Figures also show an increase of 133,200 in the number of disabled people and those with long-term health conditions classed as active – the first increase in this category since the 2012 Olympic and Paralympic Games – with gym sessions showing the biggest growth.

Retired people are also getting active, with retirees specifically leading to a decrease in the number of 55+ adults classed as inactive.

The survey also shows that the activity habits of the nation continue to change:

But while ways of getting active are becoming more diverse, Sport England's research also shows that 5.5m people who are not currently active, don’t feel they have the ability to be active.

And even though large numbers of the population still do traditional sports, the numbers aren’t growing:

Things are moving in the right direction, however, stubborn inequalities remain which show that sport and physical activity still isn’t appealing to everyone.

It isn’t right or fair that people on a low income, women and black and South Asian people are still less likely to be active.

We’re working hard to address that across all of our programmes, with a new stage of the This Girl Can campaign, Fit Got Real, just one example.

We urge all sport and physical activity providers to think about the practical steps they can take to make their sports more welcoming and inclusive to all.


People are gravitating towards activities that can fit into their busy lives, that are enjoyable and where ability doesn’t have to matter.


The fact that traditional sports participation isn’t growing is worrying considering their importance in the fabric of the nation and the positive social and community benefits they can bring.


The nation’s activity habits are changing. The sports sector must become more demand led as a result.


We must ask how our sports can offer consumers the convenience they seek and offer activities that are enjoyable, affordable and accessible.”

Welcoming the results, Minister for Sport and Civil Society Mims Davies MP reinforced the benefits of sport and physical activity to mental and physical wellbeing, as well as the importance of making increasing activity levels a key priority.

There is still much more to do to tackle stubborn inequalities in participation.  I want the sector to continue to innovate and make sure that everyone, no matter what background they are from, can get and stay active."

We're working with Bronze Labs and the Black Country STP to develop a database of #PhysicalActivity opportunities… https://t.co/SbMLkcANNy
Follow us on Twitter @BCbeactive