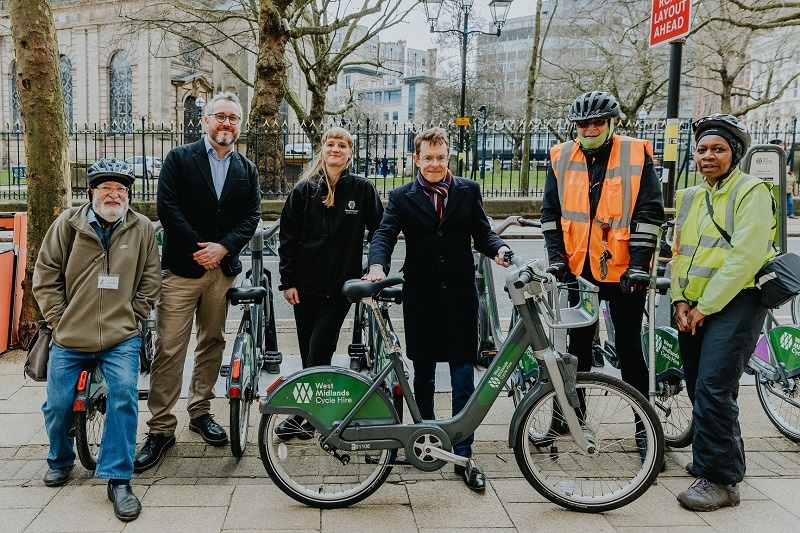 This week marks one year since the launch of the West Midlands Cycle Hire scheme, which has so far seen more than 200,000 journeys taken across the region.

People using the hire bikes have also cycled for more than 90,000 miles and covered an incredible 550,000 kilometres during the first year, showing that there is a real appetite for people to cycle in and around the West Midlands.

Since the initial launch in Wolverhampton in March 2021, 1,350 green and grey branded pedal bikes and 150 green and purple electric bikes have been delivered onto the streets of Birmingham, Coventry, Sandwell, Solihull, Stourbridge, Sutton Coldfield, Walsall and Wolverhampton.

The scheme, the largest in the UK outside London, was introduced by Transport for West Midlands (TfWM) as a convenient and more environmentally friendly alternative to the car for shorter journeys and is a large part of wider active travel plans for the region, to achieve the target of 5% of journeys taken by bike by 2023.

To celebrate one year of the scheme, customers can benefit from 50% off 100-minute bundles until Sunday, 13th March 2022 by inputting the promo code BIRTHDAY2022 when purchasing through the Beryl app.

Part of the scheme’s development in 2022 will include being a major part of transport plans as Birmingham hosts the 2022 Commonwealth Games.

As well as this, organisations are now being invited to submit a tender application to become the official sponsor for the scheme.

Andy Street, the Mayor of the West Midlands, said:

Our region’s Cycle Hire scheme has had a fantastic year, with more than 200,000 journeys taken since the first bikes were launched across the West Midlands. We’ve also seen the public really warm to the introduction of eBikes in December, which makes it even easier for even more people to get involved with cycling. But there is still a long way to go, with more communities to reach and more people to encourage to turn to two wheels. That’s why finding the right sponsor for the scheme is critical, and I am excited to see who steps forward to partner with us. Not only is cycling brilliant for people’s physical health, it also helps reduce the number of cars on the road, tackling congestion, air pollution, and the climate emergency. That is why I am so committed to our Cycle Hire scheme, and to improving and promoting active travel right across the region.”

This scheme has achieved a huge amount in a short space of time. Its popularity amongst residents and visitors proves that people are interested in getting on their bikes, whether to get to work, to enjoy local parks or to use the bikes for short utility journeys in our towns and cities. The West Midlands Cycle Hire scheme is a gateway for people who haven’t cycled for a long time, or ever, to see what it’s like to travel around by bike. With high-quality infrastructure going live this year and ambitions to deliver more, we’re working hard to make it easier for people to choose cycling for short journeys. So, if you haven’t already, why not give it a go?”

We are delighted to have played our part in the development of the West Midlands Cycle Hire Scheme and making it such a success in just a year. Working with our partners including Pashley, and using our experience of managing cycle hire schemes elsewhere, we have focussed on implementing a scheme that meets the needs of the West Midlands, its resident and visitors. I would like to thank the Serco team who have worked so hard over the past year and we look forward to working with Transport for West Midlands and others on the scheme’s future development.”

West Midlands Cycle Hire is operated by Serco under a five-year contract from TfWM, which is part of the West Midlands Combined Authority (WMCA).

The bikes, docking stations and locking mechanisms are all manufactured in the region, with the bikes manufactured by Stratford-upon-Avon based company Pashley.

RT @LtPFUK: Announcing... the 2022 Levelling the Playing Field awards!🏆 Know someone involved in LtPF who is dedicated, has overcome adver…
Follow us on Twitter @BCbeactive