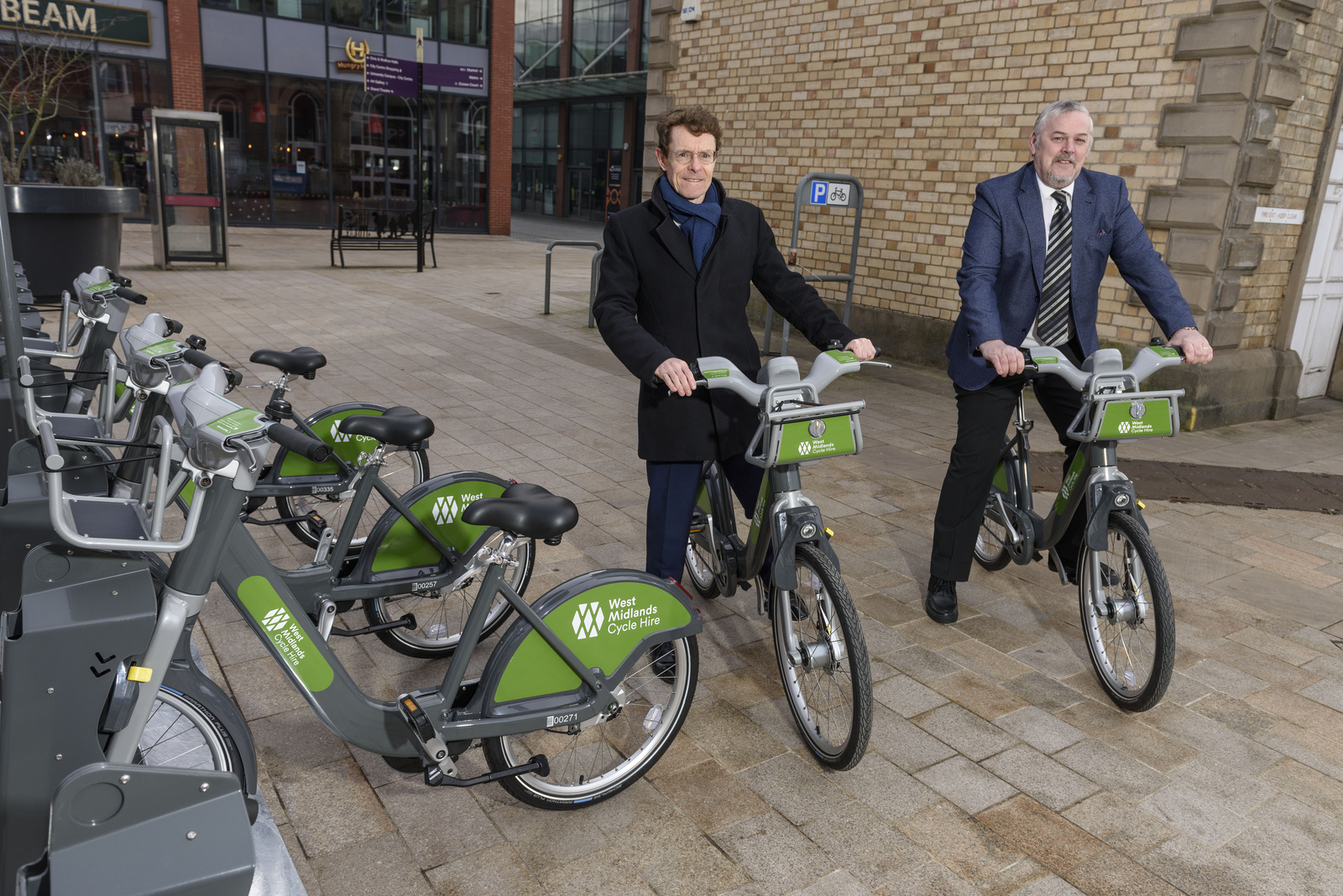 West Midlands Cycle Hire has opened to the public with the distinctive grey and green bikes available on the streets of Sutton Coldfield and Wolverhampton from today.

Up to 20 docking stations have been placed at key locations around Wolverhampton, including outside the bus station, with five docks also up and running in Sutton after a successful month-long trial in the town. The bikes in both locations can be unlocked via the Beryl Cycle Hire smartphone app. Currently the bikes can only be hired for essential journeys and daily exercise, but as restrictions start to ease they can also be used for other trips.

The bikes will continue to be rolled out across other boroughs in the West Midlands in the coming months, and when fully rolled-out later this year there will be 170 fixed docking stations and 1,500 bikes for hire across the region, of which 150 will be powered e-bikes.

There is an option to increase this as demand grows. To celebrate today’s launch in Wolverhampton and Sutton Coldfield, West Midlands Cycle Hire are offering everyone who signs up their first 30 minute bike ride for free.

The cycle hire scheme has been launched by Transport for West Midlands (TfWM), part of the West Midlands Combined Authority (WMCA), to encourage more people to become active and healthy and offer a convenient and more environmentally-friendly alternative to the car for shorter journeys.

Andy Street, the Mayor of the West Midlands and chair of the WMCA, said:

I am really pleased to get our West Midlands Cycle Hire scheme up and running and see the new bikes out on the streets of Sutton Coldfield and Wolverhampton ready to be used. The scheme is all part of our wider plans to promote and improve cycling across the region, as we continue to invest millions in our 500-mile Starley Network of safe cycle routes, as well as help fund a range of community-led projects through the Better Streets Fund.

Not only is cycling brilliant for people’s fitness and physical health, but it also helps reduce the number of cars on the road, helping us to tackle congestion, air pollution, and the climate emergency we are facing as a region. As we emerge from lockdown I’m sure our Cycle Hire Scheme will prove to be incredibly popular for cyclists both young and old, and I would urge people of all abilities to give the bikes a go.”

We’re pleased to be part of the West Midlands Cycle Hire scheme. Cycling has a crucial role to play in tackling issues such as congestion and pollution, as well as offering a great way of getting exercise and enjoying the fresh air. We’re working hard to support cycling in Wolverhampton, with new routes being planned for the city, including a pathway along the central reservation of Ring Road St Peters and the creation of a continuous cycle route along the A4124 Wednesfield Road which will provide a key link between the city centre and New Cross Hospital.

As a city we are committed to improving our infrastructure for more sustainable transport and these two schemes will complement other work we carried out over the summer to improve the city for cyclists and pedestrians. The addition of a new £525,000 cycle hub next to the railway station later this year also forms part of the city’s award-winning £150million Interchange development, better connecting cycling with bus, train and tram.

And we hope the announcement that Wolverhampton has been chosen as the start and finish of the cycling time trial for the Birmingham 2022 Commonwealth Games will encourage people to enjoy this healthy, fun and environmentally-friendly method of transport.”

The pedal cycles have three gears to cope with hilly parts of the region and are fitted with high quality laser safety lights. The five-year contract with Serco, the operator of London’s successful Santander Cycle Hire scheme, offers the opportunity for more docks and bikes to be provide as demand increases. The bikes are made by Pashley’s in Stratford-upon Avon and the docking stations and locks are also manufactured in the West Midlands.

It costs £1 to unlock a bike and 5p per minute after that. This means a 20 minute cycle will cost £2 and an hour £4. The bikes can be hired using the Beryl Cycle Hire app. Later this year, they will also be available via the new Swift App. This will be the first app for the West Midlands to offer ticket purchases, the Swift Collector, departure information, journey planning, car hire and more, all in one place. Investment in cycling facilities is a key part of the region’s plan to encourage more alternatives to the car for shorter journeys around or busy towns and cities with a view to reducing congestion, improving air quality and helping the region achieve its #WM2041 net zero-carbon target.

Cycling during covid-19 is the perfect way to make essential trips and exercise whilst practising social distancing. To keep everyone safe we are asking our riders to remember to wash or sanitise their hands before and after they ride, avoid touching their faces whilst riding and to wear gloves if possible.

#Walking is good for our minds, our bodies and our neighbourhoods and has been a lifeline during the past year, hel… https://t.co/9Whjry0AHY
Follow us on Twitter @BCbeactive